Exploring the biosocial, delving into the entanglement of biological systems with the social and cultural lives of humans, our ancestors, and a few of the other animals with whom humanity shares close relations 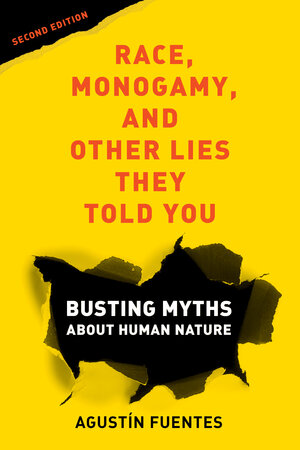 There are three major myths of human nature: humans are divided into biological races; humans are naturally aggressive; and men and women are wholly different in behavior, desires, and wiring. Race, Monogamy, and Other Lies They Told You counters these pervasive and pernicious myths about human behavior.

Presenting scientific evidence from diverse fields, including anthropology, biology, and psychology, Fuentes devises a myth-busting toolkit to dismantle persistent fallacies about the validity of biological races, the innateness of aggression and violence, and the nature of monogamy, sex, and gender. This revised and expanded edition provides up-to-date references, data, and analyses, and addresses new topics, including the popularity of home DNA testing kits and the lies behind ‘"incel" culture; the resurgence of racist, nativist thinking and the internet's influence in promoting bad science; and a broader understanding of the diversity of sex and gender.

See Agustín in the news

"What Makes us Human? Creativity and the Human Niche"

"Over the last two million years members of the genus Homo (humans) underwent significant changes in brains, bodies and behavior and created a new niche, a new way of being in the world."